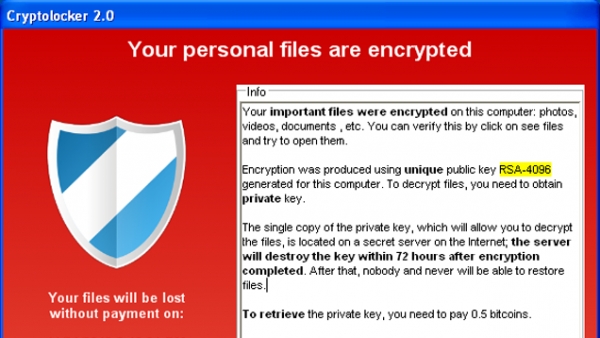 Ransomware is a type of malware that prevents or limits users from accessing their system. This type of malware forces its victims to pay the ransom through certain online payment methods in order to grant access to their systems, or to get their data back. Some ransomware encrypts files (called Cryptolocker). Other ransomware use TOR to hide C&C communications (called CTB Locker).

The ransom prices vary, ranging from $USD 24 to more than $USD 600, or even its bitcoin equivalent. It is important to note, however, that paying for the ransom does not guarantee that users can eventually access the infected system.

Users may encounter this threat through a variety of means. Ransomware can be downloaded by unwitting users by visiting malicious or compromised websites. It can also arrive as a payload, either dropped or downloaded by other malware. Some ransomware are delivered as attachments to spammed email.

Once executed in the system, a ransomware can either (1) lock the computer screen or (2) encrypt predetermined files with a password. In the first scenario, a ransomware shows a full-screen image or notification, which prevents victims from using their system. This also shows the instructions on how users can pay for the ransom. The second type of ransomware locks files like documents, spreadsheets and other important files.

Ransomware is considered a "scareware" as it forces users to pay a fee (or ransom) by scaring or intimidating them. In this sense, it is similar to the FAKEAV malware, though using a different tactic. Instead of capturing the infected system or encrypting files, FAKEAV coax users into purchasing their bogus antimalware software by showing fake antimalware scanning results. First cases of ransomware infection were seen between the years 2005 – 2006 in Russia. We first reported this incident back in 2006, in which a ransomware variant (detected as TROJ_CRYZIP.A) zipped certain file types and overwrites these, thus leaving only the password-protected zip files in the user’s system. It also created a notepad, which poses as the ransom note to inform users that they can retrieve their files in exchange for $300.

By 2011, we first reported about SMS ransomware threat, in which users with infected systems were asked to dial a premium SMS number. Detected as TROJ_RANSOM.QOWA, this variant also displays a ransomware page repeatedly to users until they finally pay up the ransom via dialing a certain premium number.

To up the ante, we uncovered a ransomware that infects the Master Boot Record (MBR) of a vulnerable system. By targeting the MBR, this variant prevents the operating system from loading. To do this, the malware copies the original MBR and overwrites it with its own malicious code. After doing this routine, it automatically restarts the system for the infection to take effect. When the system restarts, the ransomware displays its notification (in Russian).

Ransomware infection was initially limited to Russia. But its popularity and profitable business model soon found its way in other countries across Europe. By March 2012, we have noticed the continuous spread of ransomware infection across Europe (and the United States, Canda). Similar to TROJ_RANSOM.BOV, this slew of ransomware displays a notification page from the victim’s local police agency instead of the typical ransom note (see Reveton, Police Ransomware below).

We also uncovered a different tactic to spread ransomware variants. Certain threat actors compromised a popular French confectionary shop’s website to serve TROJ_RANSOM.BOV. This watering hole-like tactic resulted to widespread infection in France and Japan (where the shop has a significant fan-base). Instead of the usual ransom note, TROJ_RANSOM.BOVdisplays a fake notice from the French police agency Gendarmerie Nationale.

The Rise of Reveton or Police Ransomware

Reveton (also known as Police Ransomware or Police Trojan) is a type of ransomware that impersonates law enforcement agency. These malware typically shows a notification page purportedly from the victim’s local law enforcement agency, informing them that they were caught doing an illegal or malicious activity online.

To know which local enforcement agency is applicable to users, Reveton variants track the geographical location of their victims. Thus, affected users living in the US receive a notification from the FBI while those located in France are shown with a notice from the Gendarmerie Nationale.

In 2012, we have seen different types of Reveton variants exhibiting new techniques. During the latter part of that year, we reported about variants that play an audio recording using the victim’s native language and another one bearing a fake digital certificate.

The Evolution to CryptoLocker

In late 2013, we saw a new type of ransomware emerge. These ransomware variants now encrypt files, aside from locking the system. This is to ensure that users will still pay up even if the malware itself was deleted. This new type of ransomware was dubbed as “CryptoLocker” due its new behavior. Like previous types of ransomware, these malware demand payment from affected users, this time to unlock their now-encrypted files. 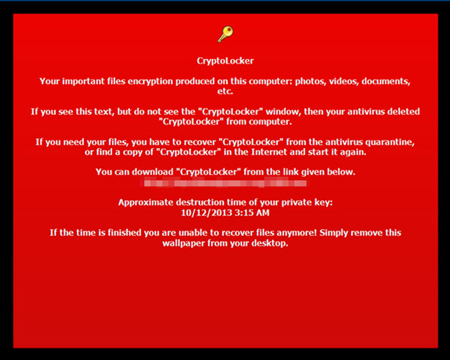 Although the ransom note in CryptoLocker only specifies “RSA-2048” as the encryption used, our analysis shows that the malware uses AES + RSA encryption.

The malware uses an AES key to encrypt files.  The AES key for decryption is written in the files encrypted by the malware. However, this key is encrypted with an RSA public key embedded in the malware, which means that a private key is needed to decrypt it. Unfortunately, the said private key is not available.

Further research revealed that a spam campaign was behind the CryptoLocker infections. The spammed messages contain malicious attachments belonging to TROJ_UPATRE, a malware family characterized by its having small file size and a simple downloading function. It downloads a ZBOT variant which then downloads the CryptoLocker malware.

Near the end of 2013, a new variant of  CryptoLocker emerged —with propagation routines. This variant, WORM_CRILOCK.A, can spread via removable drives, a routine unheard of in other CRILOCK variants. This means that the malware can easily spread compared to other variants. This new variant doesn’t rely on downloader malware like CRILOCK to infect systems; rather, it pretends to be an activator for software in peer-to-peer (P2P) file sharing sites. Technical differences have led some researchers to believe this malware is a product of a copycat.

Another file encrypting ransomware soon came into the picture. This malware, known as CryptoDefense or Cryptorbit, like other encrypting ransomware, demands payment for its decryption services. Detected by Trend Micro asTROJ_CRYPTRBIT.H, this variant encrypts database, web, Office, video, images, scripts, text, and other non-binary files. It also deletes backup files to prevent restoration of encrypted files.

The Foray into Cryptocurrency Theft

Ransomware soon began to incorporate yet another element: cryptocurrency (e.g., Bitcoin) theft. We came across two variants of this new malware, called BitCrypt , The first variant, TROJ_CRIBIT.A, appends “.bitcrypt” to any encrypted files and uses an English-only ransom note. The second variant, TROJ_CRIBIT.B , appends “.bitcrypt 2″ and uses a multilingual ransom note, with 10 languages included. CRIBIT variants use the encryption algorithms RSA(426)-AES and RSA(1024)-AES to encrypt the files. This malware also requires that the payment for unlocking files come in the form of Bitcoins.

It was discovered that a variant of the FAREIT information stealing malware, TSPY_FAREIT.BB, downloads TROJ_CRIBIT.B. This FAREIT variant can steal information from various cryptocurrency wallets, including wallet.dat(Bitcoin), electrum.dat (Electrum), and .wallet (MultiBit). These files contain important information such as transaction records, user preferences, and accounts.

A new variant of Ransomware and Cryptolocker threats surfaced that leverages the Windows PowerShell feature to encrypt files. Trend Micro detects this as TROJ_POSHCODER.A. Windows PowerShell is a built-in feature in Windows 7 and higher. Cybercriminals often abuse this feature to make threats undetected on the system and/or network.

While crypto-ransomware may have become popular with cybercriminals, this doesn’t mean that other types of ransomware have disappeared from the landscape. We recently came across police ransomware that locks the screen of the infected computer. What makes this particular ransomware different from other police ransomware is that its infection vector is patched malware. Patched malware is any legitimate file that has been modified (via addition or injection) with malicious code. Modifying a legitimate file can be advantageous to cybercriminals as the rate of execution of malicious code will depend on the infected file’s frequency of use.

Another distinction for this ransomware is that it infects user32.DLL, a known critical file. Infecting a critical file can be considered an evasion technique as it can help prevent detection by behavioral monitoring tools. Additionally, cleaning critical files such as user32.DLL requires extra care as one misstep can crash a system, which could be seen as a possible obstacle for cleaning tools.

The infected user32.DLL will begin a chain of routines that ends with the ransomware being loaded.  Included in the ransomware’s routines is locking the computer’s screen and projecting a “ransom” image, similar to previous police ransomware messages.

In our 2013 Security Predictions, we predicted that conventional threats like ransomware are likely to evolve gradually, as cybercriminals will focus mainly on refining existing tools. This is partly propelled by the ongoing arms race between certain cybercrime groups and security researchers. Because of the positive developments in catching these groups, like the arrests of certain FAKEAV groups and ransomware key figure, we can expect ransomware variants to contain new functions and other improvements in terms of stealth mechanism.

Critroni or Curve-Tor-Bitcoin (CTB) Locker came about in 2014. This type of ransomware uses the Tor network to mask its C&C communications. Some variants of this ransomware asks for bitcoins as ransom. CTB Locker variants in 2015 introduced "freemium" - free decryption service. Also in 2015, TorrentLocker ransomware attacks were prevalent in the Australia-New Zealand region. This particular ransomware adds CAPTCHA code and redirection to a spoofed site.

Watch "TorrentLocker In Action" in the video below:

Within a couple of years, we have seen ransomware evolved from a threat targeting Russian users into an attack affecting several European and North American countries. With profitable a business model and payment schemes affording anonymity for its perpetrators, we may be seeing more of ransomware in the coming years. Thus, it is crucial for users to know how ransomware works and how to best protect themselves from this threat.

Below are known ransomware families:

What Can Users Do?

Users infected by ransomware should do the following:

Note that some ransomware requires extra removal steps such as deleting ransomware files in Windows Recovery Console. Be sure to follow all required steps to completely remove the specific ransomware your computer has.

To prevent ransomware infections, keep these things in mind:

To combat ransomware in your home and home office PCs, try the following Trend Micro products that uses the power of the Smart Protection Network:

Ransomware also affects office networks and workstations. The following Trend Micro products ensure the safety and protection of your corporate networks and desktops against ransomware attacks:

In addition, Deep Discovery protects your corporate network from ransomware - from monitoring communication ports, analyzing malware, and network traffic monitoring. These prevents the spread of ransomware to other computers in the corporate network and contains the threat should it be detected at any level.

Other detection and removal tools for ransomware known as CryptoLocker are available for your use:

Below are the latest notable ransomware that Trend Micro analyzed: